Announcing the release of the Delta Historical Ecology report 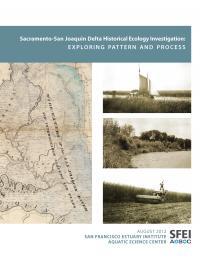 The Sacramento-San Joaquin River Delta has been transformed over 150 years from the largest system of wetlands on the West Coast of the United States into an expanse of farms, levees and channels that support California’s water delivery system.

A new study provides a detailed look at the Delta before levees and water diversions permanently altered it. This will help guide efforts now under way to improve ecological function in the Delta by providing new insight into how the region once appeared and worked. Using old maps, early photographs and the accounts of explorers, settlers and hunters from more than a century ago, the richly-illustrated study gives a never-before-seen picture of the ecosystem at the heart of California’s environmental and water debates.

“This masterpiece of historical ecology will be widely used by policy makers and scientists because it provides a detailed, painstakingly-crafted description of the Delta of the past - a benchmark from which we will measure the success of programs to rebuild habitats and ecological functions lost over the past century and a half,” said Jim Cloern, a Senior Research Scientist at the U.S. Geological Survey, in Menlo Park, who was not part of the research team.

The report, Sacramento-San Joaquin Delta Historical Ecology Investigation: Exploring Pattern and Process, was developed by researchers in historical ecology at the San Francisco Estuary Institute-Aquatic Science Center, in collaboration with California Department of Fish and Game and with input from numerous scientists, archivists, historians, and local residents. The project was funded by DFG through the Ecosystem Restoration Program.

The purpose of the study was, "not to go back, but to understand how this landscape worked so we can re-establish ecologically functional and cost-effective habitats within the contemporary landscape,” said SFEI-ASC Senior Scientist Robin Grossinger.

The report notes that only 3 percent of the tidal wetland that existed in the Delta in the early 1800s remains wetland today. It describes the historical Delta as a series of landscapes: the central Delta was characterized by tidal freshwater wetlands of tule (a tall wetland plant) and willow with numerous winding channels; the north Delta featured broad flood basins of tule interspersed with lakes, and rivers bordered by broad forests; while the south Delta had wetlands interspersed with side channels, lakes and ponds, willows and patches of seasonal wetland. Though the Delta is irrevocably altered, it does not mean that the past is irrelevant. This research provides a pathway for discovering new opportunities for a healthy Delta ecosystem that withstands future climate change and land and water use changes. “This study goes beyond describing the extent, distribution and character of channels, lakes, wetlands and forests of the past to discuss how pieces fit together to form functional landscapes,” said Alison Whipple, lead author of the study at SFEI-ASC and a graduate student at UC Davis. “This information is valuable to improving strategies for large-scale restoration within the current and future Delta.” The report and GIS are available for download at http://www.sfei.org/DeltaHEStudy.

Printed copies of the report, with dozens of rarely seen historical accounts, maps and photographs describing the Delta of the recent past, will also be available for $75 (contact: [email protected]i.org or 510-746-7355).

An interactive map featuring the historical landscape reconstruction and early documents used to create the picture was created by SFEI-ASC with Stanford University and KQED (http://science.kqed.org/quest/delta-map/).