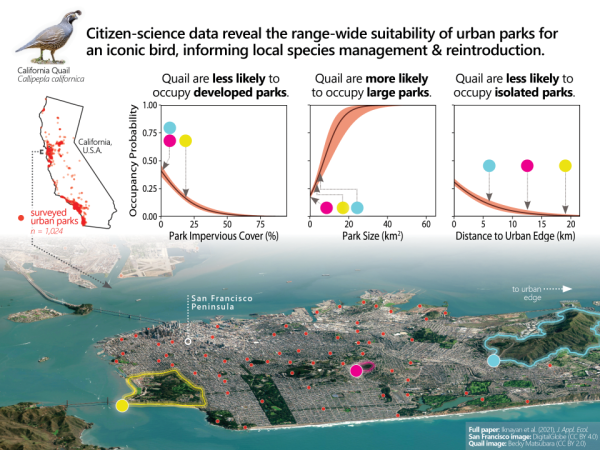 The Journal of Applied Ecology has just published research by Kelly Iknayan of the San Francisco Estuary Institute (SFEI) and co-authors from the Presidio Trust and SFEI that will help to guide a joint study on the feasibility of bringing back the native California quail to San Francisco.

The beloved official bird of San Francisco and the state of California is now extinct in the city. Numbers of wildlife in urban parks have declined over the years, as the slow drumbeat of urbanization has led to dwindling populations, and then local extinction. The idea of reintroducing wildlife is compelling, particularly when considering iconic species like California quail, or those that have recolonized urban parks on their own, like the P-22 mountain lion in Los Angeles’s Griffith Park, or coyotes in the Presidio. But it wouldn’t be wise to reintroduce wildlife without knowing why they became extinct, or without identifying the management actions most likely to sustain their populations in urban parks going forward. Says Kelly Iknayan of SFEI: “This new research provides a roadmap for identifying the drivers of local extinction, and targets management actions most likely to make a difference.”

Using community science records from eBird where birders record birds they see in urban parks across the state, researchers found several factors contributing to consistent records of quail presence. Parks like San Bruno Mountain and Mori Point that have a large area, are less isolated from urbanization, contain less paved areas, and that have coyote populations are more likely to have thriving quail communities. Large parks in San Francisco such as Golden Gate Park and the Presidio should be big enough to support quail as long as there is not too much pavement, there are plenty of shrubs, and predators are kept in check. The results of this study indicate that due to the Presidio Trust’s habitat restoration efforts over the past 13 years and the return of coyotes, conditions are now better suited for quail reintroduction efforts than they were previously.

Looking at urban parks across the state, researchers found that parks with coyotes had a 73% higher likelihood of being occupied by quail than similar parks without coyotes. First spotted in the Presidio in 2002, coyotes have since made a comeback in the park and elsewhere in San Francisco. The presence of coyotes may be good for quail because coyotes keep populations of rats, racoons, and skunks in check; all common urban species that prey on ground-nesting quail chicks making it hard for quail populations to survive and thrive.

In addition to the proper habitat and mix of wildlife, other factors under consideration by the SFEI and Presidio Trust are traffic management—using “slow streets” or closed streets to address connectivity and vehicle mortality—and the necessity for cooperation among multiple management partners. Such collaborations could make parks functionally larger by creating green corridors through the city, which may encourage quail, and biodiversity more generally. Says Lew Stringer of the Presidio Trust: “It’s going to take the cooperation of multiple agencies that manage open spaces and parks in the City to create the conditions for success across a broad territory. Other regional parks and those in San Francisco also support a healthy coyote population, which this paper suggests is beneficial for the success of the project.”

Ongoing collaboration between SFEI and the Presidio Trust will take this work further, creating a more detailed plan for reintroduction and mobilizing support for a collaborative campaign to reintroduce quail in San Francisco.

About Restoration in the Presidio

Since taking over management of the Presidio from the U.S. Army 1996, the Presidio Trust has worked with its partners at the National Park Service (NPS) and the Golden Gate National Parks Conservancy to be a model of environmental stewardship for the park’s natural landscapes. Decades of habitat restoration and bringing back lost species with the help of research and non-profit partners like California Academy of Sciences, San Francisco Zoo, UC Berkeley, and UC Davis, has increased the park’s environmental health and function by restoring native biodiversity. Successful projects include: restoring the Tennessee Hollow Watershed at sites such as Quartermaster Reach and El Polin Springs; with the planting of over 100,000 seedlings from 123 plant species, native plant cover has increased by 94 percent. Revitalizing Mountain Lake has brought back health to the 2,000 old lake and allowed the reintroduction of native three-spine stickleback, Pacific chorus frogs, western pond turtles, California floater mussel and the San Francisco forktail damselfly. Some species have been carefully reintroduced like the California ringlet butterflies, checkerspot butterflies, newts, and fence lizards. Others have returned or expanded spontaneously, like the coyote, silver digger bees, and the Green hairstreak butterflies. The Trust also manages its forest and built landscapes to the highest standards of sustainability. 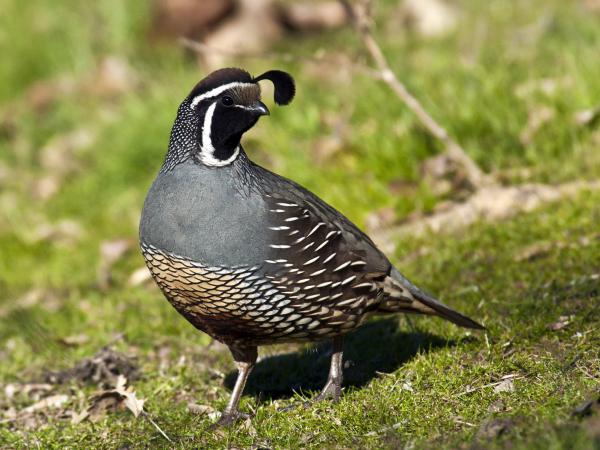 SFEI is using bird observations from eBird to study habitat suitability and build occupancy models for California Quail to inform the Presidio Trust and other park managers how management interventions could help improve quail survival.