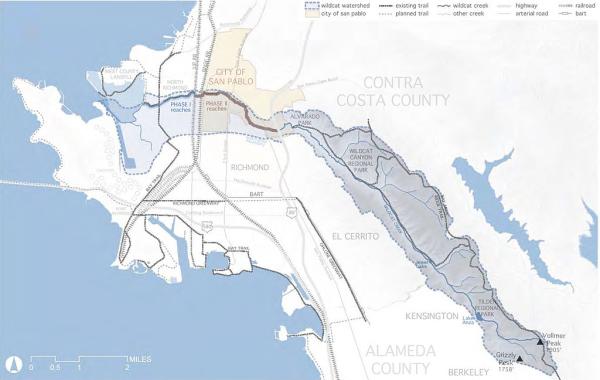 People have lived along Wildcat Creek since 3,000 to 4,000 BP. By that time, Sea level rise had slowed, and the Bay's size had stabilized, allowing broad mudflats and tidal marshes to develop and significant local settlement to commence (Banks and Orlins 1985, Fentress 1994). Along lower Wildcat and San Pablo Creeks, villages began to grow as new resources were utilized along the Bay's edge. Several thousand years later the shellmounds, containing burials, ceremonial and household artifacts, and the remains of fish, birds, and other animals had been built up to as high as thirty feet and acres in size (Luby and Gruber 1999).

At the time of European contact, the people living in Wildcat Creek Watershed were known as the Huchiun, or Jutchiun, or Cuchiyun (Milliken 1979). Of the shoreline inhabited by the Huchiun, which probably extended from about Temescal Creek to Rodeo Creek, the area around lower Wildcat Creek and the Richmond Potrero (the hills beside the Bay) was the most densely populated, presumably because of the food resources provided by the extensive marshes behind the Potrero (Banks and Orlins 1979).

The first recorded Spanish expedition to cross Wildcat Creek took place in 1772, although it is possible that Spaniards may have traveled this far north as early as 1769 (Milliken 1979). The 1772 Fages and 1776 DeAnza expeditions received festive greetings at two villages along Wildcat Creek, one of which was estimated at 100 - 200 people in size. Within three decades, nearly all the native Huchiun had been forced to move to Mission Dolores and convert to Christianity (Milliken 1979). The Huchiun homeland would remain essentially unpopulated for over a decade. The Huchiun did not disappear, though; at least one account documents native people coming down from the hills annually perhaps a century later to harvest shellfish at the Ellis Landing marshes (Fridell 1954).

In 1817, San Francisco's Mission Dolores needed more food to support the growing population of the Mission, so they established a ranch in the East Bay. Wildcat Creek was chosen as the headquarters because of the broad plains and grassy hills of Wildcat Watershed and adjacent lands. While we do not know how many cattle were grazed during this period, the ranch was operated by as many as 49 Christianized Indians (Milliken 1979), suggesting that the initial cattle herd was large. In 1823, the Mission shifted its ranching operations to the newly created Sonoma Mission. Subsquently, Francisco Castro took possession of the area, becoming the first white man to settle on the Contra Costa ("opposite coast"; Fridell 1954).

By 1830 Castro had developed Rancho San Pablo, which boasted fourteen hundred cattle, six hundred sheep, and five hundred horses (Williams 1952). With the expansion of the cattle trade to the international market, especially the eastern United States, Castro and other landowners became barons of a major industry that flourished throughout the 19th century (Purcell 1940).

After the United States took control of California in 1846, many squatters settled on the huge Castro landholdings. The onerous court proceedings lasted nearly 50 years, causing the family to lose much of its property by the time the case was settled (Richmond Chamber of Commerce 1944). During this period, farming expanded from family gardens limited to the immediate vicinity of the adobes to commercial market gardens developed by Portuguese, Italian and Irish immigrants. The bottomlands along Wildcat Creek and San Pablo Creek, with fertile alluvial soils and available water, supported a wide range of fruits and vegetables. Away from the creeks, hay and grain were the dominant crops, while intensive stock and dairy ranching continued to dominate the Potrero and Wildcat Canyon. On the Bay edge of the Potrero, Chinese immigrants utilized the deepwater access to establish a regional center of fishing and shrimp harvesting.

The length of the San Pablo Rancho Land Grant case - infamous nationally - had the effect of preventing more intensive development, because of the uncertainty over land ownership (Richmond Chamber of Commerce 1944, McGinty 1921). Ranching of the plain and Canyon, with rodeos and horseracing on San Pablo Road on the weekends (Banks and Orlins 1979) continued, along with expanding agriculture and little urban development (compared to the towns to the south) until MacDonald's fateful duck hunt in 1895.

Taking a break from an unsuccessful afternoon of hunting ducks in the marshes at the mouth of Wildcat Creek, A.S. MacDonald climbed the Potrero and noted how its unusual location provided the only local intersection of dry land with deep water. Along the rest of the East Bay, wide marshes and mudflats created a shallow water barrier for ships, necessitating long wharves like the Oakland Mole (Richmond Chamber of Commerce 1944, Rego 1997).

Within five years of MacDonald's entrepreneurial insight, Point Richmond had become the Western continental terminus of the massive Santa Fe railroad system, catalyzing the subsequent industrial and urban development of Wildcat Creek's alluvial fan. The proximity of undeveloped flatlands to both the deepwater port and the urban Central Bay almost instantly transformed Richmond into an industrial center of international significance, celebrated as "The Wonder City" and "The Pittsburgh of the West" (Cutting 1917).

In 1901, Standard Oil selected the Potrero and the marshes along Wildcat Creek (apparently ideal because of their immunity to fire) as the site of their West Coast refinery and a number of other major corporations followed within the next 15 years (Richmond Chamber of Commerce 1944, Cole 1980). The population of the Wildcat area, which at the turn of the 20th century was probably not larger than the several hundred people of the earlier Huchiun villages, now began to increase rapidly. The population of Richmond increased approximately tenfold during 1901-1903 (200 to 2,500), and again during 1903-1923 (2,500 to 23,000), (Cutting 1917, Richmond Chamber of Commerce 1944).

Residents tapped into groundwater supplies by drilling over three hundred wells (Dockweiler 1912) and several intensive commercial well fields by 1911. By the 1930s, however, local demand overwhelmed groundwater supplies and Sierran water deliveries soon rendered the local wells obsolete (Figuers 1998). In 1936, most of the Upper Canyon was protected from residential development with the formation of Tilden Regional Park (National Park Service 1936).

Population expansion slowed in the 1920s and 1930s, such that about 23,000 people were again reported in Richmond in 1940 (Purcell 1940). But World War II led to the placement of another major industrial corporation on the Wildcat Creek alluvial fan. Creation of the Kaiser Shipyard and rapid production for the war effort necessitated an even more dramatic pulse of development than that of four decades earlier. Between 1941 and 1945, 90,000 employees, particularly white and African-American families from the South and Southwest settled in the East Bay to work at Kaiser. In these five years, Richmond's population quadrupled to nearly 100,000 people (Richmond Public Library, no date).

The shipyard boom transformed the lower watershed but did not last long. The shipyards closed immediately after World War II, leaving Richmond with the problems of poorly developed infrastructure and housing, and reduced employment (Cole 1980). The population of Richmond declined to about 72,000 people by 1960 (City of Richmond 1999), while in the Upper watershed, housing expanded into the Canyon along the edges of El Cerrito, Kensington, and Berkeley. In the 1960s, a major development planned for Wildcat Canyon was abandoned, enabling the formation of Wildcat Canyon Regional Preserve in 1976. In the last two decades of the 20th century, the area's population has increased again, particularly among the Asian American and Latino communities, to an estimated 93,000 people in the city of Richmond (Banks and Orlins 1985), over 20,000 in San Pablo, and an unspecified number in the Upper Canyon (Richmond Chamber of Commerce 1996, City of Richmond 1999).