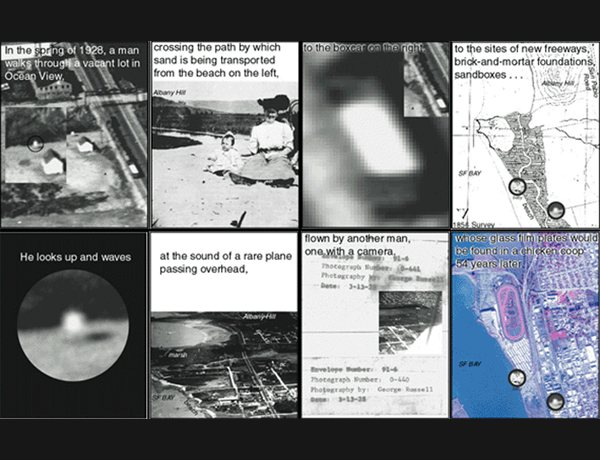 An art/science exhibit using photographic prints and graphic stories to present previously-unseen work by one of the first aerial photographers of the region. As part of their continuing investigation of the rapid transformation of the Bay Area's physical landscape, Stillhere flies over the region one lifetime ago through the captivating images of an under recognized 20th-century aerial explorer.

In the early 1920s, at the dawn of the aviation era, a mechanic-turned-photographer named George Russell began documenting the growing city of San Francisco and its still-semirural surroundings, from the sky. Over the next decade, with a bulky glass-plate camera held out the window of a low-flying biplane, he would create perhaps the earliest aerial photographic survey of the region.

Half a century later, a collection of Russell's original negatives was found cracked and decaying in a Fresno chicken coop. Given to the California State Lands Commission, the pictures' value for visualizing the historical extent of tidal waters was quickly recognized. They became important documents for defining public trust lands. In recent years, scientists guiding wetland restoration efforts have looked to Russell's photographs to provide rare depictions of the Bay's marshlands prior to development. This is the first public exhibition to include a significant selection of Russell's work.

Russell's crisp, low-altitude images create a surprisingly intimate and often beautiful portrait of the Bay Area. With the benefit of other historical documents and careful analysis, they also provide a unique vantage point above the unfamiliar landscape of the past.

In this exhibit, selections of Russell's work are accompanied by a series of intricate graphic stories combining photographs, old maps, and fragmentary biographic details. Based upon studies of landscape change by Grossinger, Brewster, and other researchers at the San Francisco Estuary Institute, these time-defying adventures extend Russell's vision backward and forward in a dynamic landscape where change has outstripped memory. The 21st century viewer is invited to accompany the photographer on his windy, bumpy plane rides as he surveys the unseen trajectories of time to glimpse for a moment the grand visions, forgotten decisions, and accidental conditions that created today's landscape, and which continue to propel us into the future.

UC Berkeley Consortium for the Arts, with the support of the Berkeley Art Museum.

Special thanks to Elise Brewster and Dave Plummer