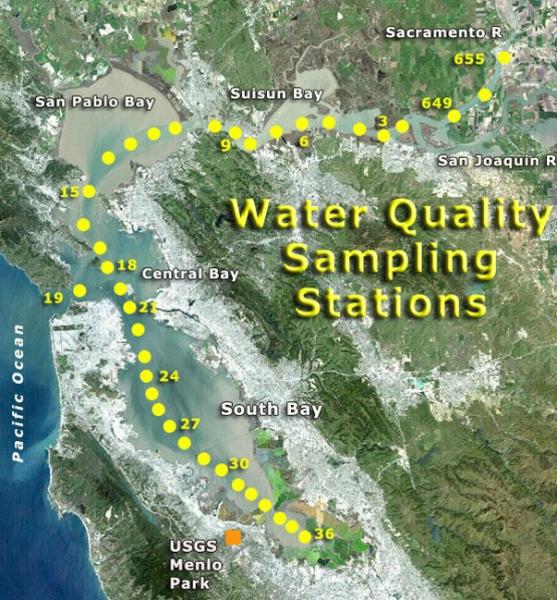 San Francisco Bay has long been recognized as a nutrient-enriched estuary, but one that has historically proven resilient to the harmful effects of nutrient enrichment, such as excessive phytoplankton blooms and hypoxia. The published literature suggests that the accumulation of phytoplankton biomass in the Bay is strongly limited by tidal mixing, grazing pressure by invasive clams, light limitation from high turbidity, and potentially, in the North Bay, ammonium inhibition of diatom uptake of nitrate. However, evidence is building that, since the late 1990s, the historic resilience of the Bay to the harmful effects of nutrient enrichment is weakening (Cloern et al., 2006; Cloern et al., 2007).

In response to the apparent changes in the Bay’s resilience to nutrient loading, and recognizing the need for both an assessment framework for nutrients (McKee et al, 2011) and a long-term monitoring strategy to assess impairment of the Bay, the San Francisco Bay Regional Water Quality Control Board, in collaboration with Bay stakeholders, are developing a San Francisco Bay Nutrient Strategy. The goal of the Nutrient Strategy is to lay out a well-reasoned and cost-effective program to generate the scientific understanding needed to fully support major management decisions and questions. A high priority within the Nutrient Strategy is developing a conceptual model for nutrients in San Francisco Bay.

The Nutrient Workgroup identified a fundamental need for developing a consensus statement on nutrient science in San Francisco Bay that documents current concerns related to maintaining and protecting Bay beneficial uses. Despite the high nutrient loads to and concentrations within the Bay, it is not obvious that beneficial uses in the Bay are currently impaired by nutrients. Instead, most of the current nutrient-related concerns are focused on future conditions in the Bay, and the possibility that alterations to one or more of the drivers (natural or anthropogenic) that influence the Bay’s biological responses to nutrients could result in an alternate and potentially impaired state for the Bay.

The Nutrient Numeric Endpoint (NNE) assessment framework being developed for San Francisco Bay recommends the use of models to assist with determining sustainable nutrient loads based on beneficial use protection. There was broad consensus among Nutrient Workgroup participants (dischargers, regional scientists, regulators) that a nutrient conceptual model is needed to help frame the questions that may eventually be explored through modeling efforts employing varying degrees of complexity, and to identify the key drivers/factors that need to be incorporated into models.

There was also broad agreement among Workgroup participants that San Francisco Bay needs a sustained monitoring program to provide the key information to support management decisions. Since 1969, a USGS research program has supported water-quality sampling in San Francisco Bay, providing monthly data on salinity, temperature, turbidity, suspended sediments, nutrients, dissolved oxygen and chlorophyll a. The USGS program, along with sampling conducted by the Interagency Ecological Program, covers the entire San Francisco Bay and Delta system, and the observations generated from these long-term data sets have contributed immensely to the current understanding of nutrient dynamics in the Bay. However, the USGS is not mandated to do this monitoring, and future funding is uncertain. The recommended monitoring program elements that will be generated through development of a nutrient conceptual model are an important early step in establishing the necessary structure of a locally-supported program.

Development of a nutrient conceptual model has four main goals:

This project will be led by David Senn of SFEI