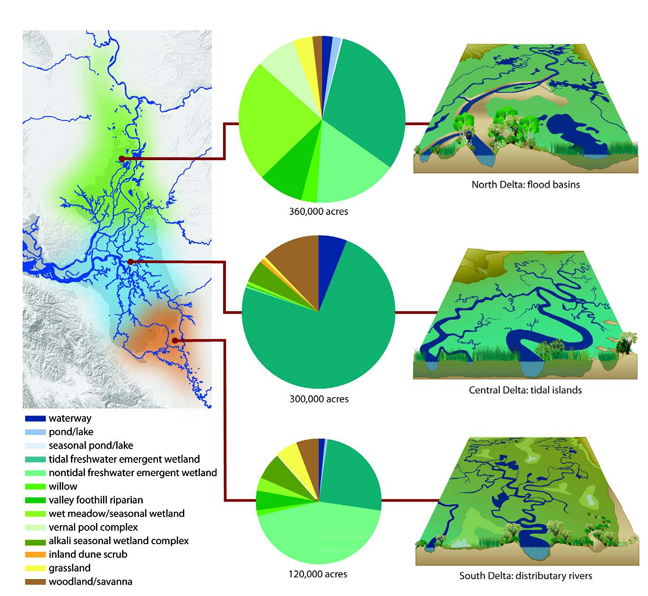 The Delta of the early 1800s was spatially and temporally complex, and that complexity expressed itself in distinct patterns across the vast physical space of the Delta. Patterns occurred at many scales. At a regional scale, the Delta can be discussed in terms of three primary landscapes: the tidal islands landscape of the central Delta (blue area), the flood basins landscape of the north Delta (green area), and the distributary rivers landscape of the south Delta (orange area).

Central Delta tidal islands (middle diagram), on the order of 10,000 acres, supported a matrix of emergent vegetation (primarily tule), willows, grasses, sedges, shrubs, and ferns and were surrounded by broad and deep tidal channels. Channel banks were low and numerous small branching tidal channels wove through the wetland plain, allowing high tides to regularly inundate most of the area.

Flood basins of the north Delta (top diagram) were greatly influenced by the flooding regime of the Sacramento River as well as other streams that regularly overflowed into the low-lying basins running parallel to the rivers. Large lakes occupied the lowest and most isolated positions, and few channels penetrated far into the dense emergent vegetation wetland plain as it transitioned gradually away from tidal influence upstream. The basins were bounded by riparian forest along natural levees and seasonal wetlands of the upland margin.

In the south Delta (bottom diagram), the three distributary branches of the San Joaquin River influenced the general pattern of the landscape. These branches put off numerous secondary overflow channels that serviced the floodplain, which broadened quickly downstream and merged gradually into tidal wetlands. Patches of different habitat types were interspersed within the emergent wetland, including willow thickets, seasonal wetlands, grasslands, as well as perennial and seasonal ponds and lakes.

These historical Delta landscapes were governed by many of the same physical processes and shared many of the same habitat types. However, many characteristics differed, including the relative proportion of habitat types, size features and habitats, vegetation community, hydrologic and habitat connectivity, and landscape position. Boundaries between the landscapes were indistinct and varied depending upon the characteristic examined. Thinking about these landscapes in a conceptual manner, removed from their exact geographical location, can help support a flexible landscape framework to guide sustainable restoration strategies in the contemporary and projected future Delta.