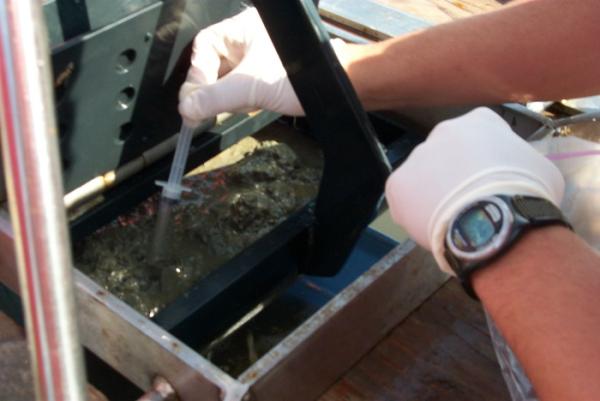 This page presents sediment chemistry thresholds for seven different contaminant classes, used by the Dredged Material Management Office (DMMO) for determining when bioaccumulation testing will typically be required for dredged material proposed to be discharged at unconfined open water disposal sites in San Francisco Bay. These same thresholds are also used by DMMO to determine when additional analysis of the post-dredge sediment surface (“residual” or “z-layer” sediments) may be warranted. The June 9, 2011, Essential Fish Habitat Agreement between USACE, USEPA, and NMFS established the approach used to determine the testing thresholds for San Francisco Bay sediments.

The individual chemical thresholds presented in the table below are of two types:

a. DMMO no longer requires bioaccumulation testing for mercury above the BT. See Amendment to EFH consultation.

b. Threshold based on San Francisco Bay ambient sediment concentrations, as described further below.

What data are used in calculating the threshold concentrations for Mercury, PCBs, and PAHs?

These values are intended to be based on the most recent 13 years of RMP sediment data. In previous years, these values were calculated on the most recent 10 years of data. However, because the frequency of RMP sediment sampling has been changed from every two years to every four years, the current 13-year window is needed to ensure that each threshold update is based on at least four sediment sampling events. In 2002, the RMP adopted a probabilistic (random, spatially balanced) sampling design to obtain a more representative characterization of conditions throughout the Bay, and only the newest 13-year data are used in calculating the BTs and TMDL-based limits. The individual threshold values are expected to change slightly each year and may be higher or lower than the previous year.

The summary table below presents the BTs for mercury, PCBs, and PAHs and TMDL-based in-Bay disposal limits for mercury and PCBs, after removal of any statistical outliers. Further details on the calculation of these thresholds are provided in the links below. The actual BTs used by DMMO agencies are based on the 90th UTL of the 90th percentile concentrations shown, but rounded to the nearest two significant figures. Thresholds for prior years are shown in the link below the table.

In order to make direct comparisons of dredging project sediment chemistry results to BTs and TMDL limits, it is important that dredgers report total PCBs (40 congeners) and total PAHs (25 compounds) in the same manner as the RMP. The target analytes are shown in this table. A discussion of DMMO’s accepted method for analyzing PCB congeners in San Francisco Bay area dredged material is presented here.

1 The ambient-based thresholds for PCBs are based on 2002-2003 and 2007-2014 RMP data. The 2004-2006 PCB data are not included in the analysis because of a recently identified issue with sample processing at the laboratory. PCB results for 2004-2006 passed routine laboratory and RMP Quality Assurance; however, were censored in 2014 due to a low bias identified in the extraction method. The 2002-2003 samples were re-analyzed alongside the 2010 samples; therefore, the 2002-2003 data are unaffected.

2 The RMP reports total PCBs and PAHs using slightly different analyte lists and/or analytical methods than those shown in the DMMO's “Guidelines for Implementing the Inland Testing Manual in the San Francisco Bay Region”. For PCBs, instead of the Aroclor mixtures, the RMP reports a sum of 40 PCB congeners. For dredged material testing, the DMMO recommends USEPA Method 8082 which employs gas chromatography/electron-capture detection (GC/ECD) capable of achieving per congener detection limits in the 0.1 – 0.6 μg/kg range and reporting limits in the 0.5 – 1.0 μg/kg range. Alternative analytical methods may be acceptable as long as the detection and reporting limits are comparable to those of Method 8082. For PAHs, the RMP reports a slightly expanded list of PAH compounds (25 compounds vs. the previous DMMO list of 16). Since all the PAHs in this expanded list are measured by the same analytical method most commercial laboratories already use when analyzing sediment samples (EPA 8270 SIM), there should be little or no cost increase for reporting the additional PAHs.

3 The ambient-based thresholds for Hg were previously based on a 10 year window (2003-2012). Beginning with the current threshold calculation, a 13-year time window will be used, in order to account for the recent reduction in sediment sampling frequency from every two years to every four years. However, to maintain consistency with the previous threshold calculation, the current ambient-based thresholds for Hg were calculated based on the 2003-2014 time window.

Ambient-Based Thresholds from Prior Years