Olfactory Effects of Copper on Salmonids 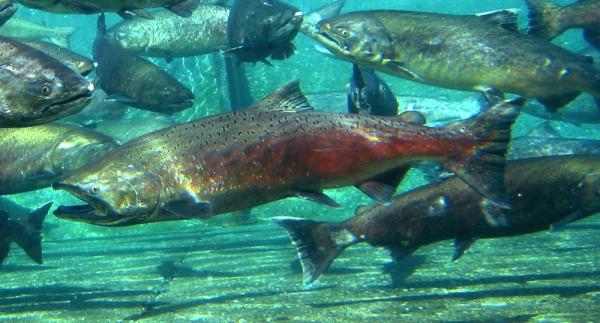 Copper has been a priority concern due to its acute toxicity to aquatic life. As a result of a significant body of work demonstrating that much of the copper in the Bay is not bioavailable and the on-going observations of concentrations below water quality objectives, the Bay was delisted for copper. Site-specific objectives (SSO) for copper were developed in 2007 that establish criteria for various segments within the Bay. The site-specific objective specifically called for further study on the potential toxicity of copper to the olfactory system of salmonids.

Exposure to dissolved copper has been shown to cause olfactory impairment at relatively low concentrations in freshwater fish, resulting in an impaired avoidance respond to predators. These effects are seen at concentrations near 3 μg/L; which are lower than the current SSO. However, aquatic chemistry in saltwater systems is dramatically different from freshwater systems; according to the Biotic Ligand Model, dissolved organic matter in seawater may be protective against copper neurotoxicity. Also increasing the uncertainty are the different life stages of salmon found in salt water than in fresh water.

The goal of this study is to determine the impact of dissolved copper on the olfactory system of fish in estuarine systems. The work will be conducted by NOAA Marine Fisheries, which will also contribute significant matching funds.

This study will be based on previous NOAA studies that measured copper olfactory toxicity in freshwater-phase juvenile salmon (Baldwin et al. 2003; Sandahl et al. 2007; McIntyre et al. 2008). As was conducted in these previous studies, the impact of copper exposure on the sensitivity of the salmon olfactory system to odors will be measured using direct electrophysiological recordings (electroolfactograms; EOGs) from the olfactory epithelium (Baldwin et al. 2003). The experiments will be performed at the Northwest Fisheries Science Center (NWFSC) Mukilteo Field Station (Mukilteo, WA) using Chinook salmon (Oncorhynchus tshawytscha). Fertilized eggs will be obtained from a local hatchery and reared in freshwater at Mukilteo until the fish are the appropriate age for smolting. The majority of the fish will then be transitioned to seawater and maintained in seawater for the duration of the experiment, while a subset will remain housed in freshwater. Water samples will be collected for analyses of water chemistry parameters (e.g. salinity and DOC) and copper concentrations.

To determine the effect of copper on the olfactory system, odor-evoked EOGs will be obtained from fish using a standard odorant, the amino acid L-serine. Fish will be either unexposed to copper (controls) or exposed for a short period (30 minutes) to one of at least 3 copper concentrations (ranging from 2-20 µg/L, but higher if needed). Copper-induced changes in the sensitivity of the olfactory system will be measured as a dose-dependent reduction in the amplitude of the odor-evoked EOGs from which an effect threshold for copper can be determined.

Because DOC is known to affect the toxicity of copper to the olfactory system (McIntyre et al. 2008), exposures will be performed at three different DOC concentrations representative of the SF Bay (e.g. 2, 4, and 6 mg/L). To the extent possible, the source of DOC used to amend the local seawater (which is ~2 mg/L DOC) will have copper binding properties similar to that of DOC from the San Francisco Estuary. The aim of the study will be to determine the effects threshold for the olfactory toxicity of copper in seawater-phase juvenile salmon at various DOC concentrations in order to compare this with thresholds measured from freshwater-phase salmon and with the copper SSOs in the SF Bay estuary.

This project will be performed by David Balwin and staff of the Environmental Conservation Division of the NOAA Northwest Fisheries Science Center.