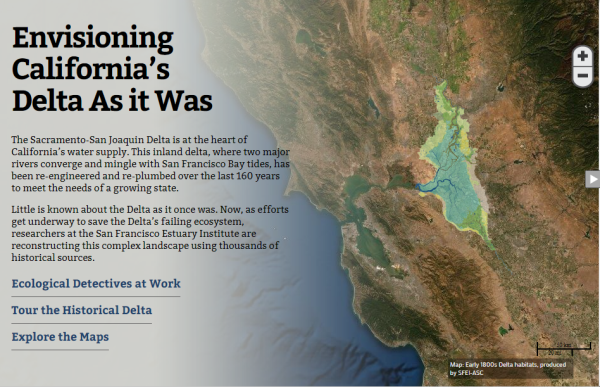 As detective stories go, this sunny, spring day in the Delta isn't a typical backdrop. In the distance, tractors move slowly through dry fields of row crops.

"Once he got lost, they were wandering all over," says Alison Whipple of the San Francisco Estuary Institute, a non-profit research group based in Richmond. Her colleague, Robin Grossinger, agrees. "They were all over this place." The two are trying to piece together the path of William Wright, a man who got hopelessly lost somewhere nearby.

I should probably mention: it happened 160 years ago. Whipple and Grossinger are historical ecologists. They use sources like old photos, hand-drawn maps and early land surveys to sleuth out what this landscape looked like before it was dramatically remade by Californians.

The Delta's landscape has been dramatically remade over the last 200 years. Today, it's a crucial part of the state's water system, supplying 25 million people and irrigating millions of acres of farm land. But with this re-engineering, the Delta's ecosystem has collapsed, harming the fishing industry and putting water supplies at risk. Little is known about what it once looked like.

Lost in a Delta Marsh

Standing on a levee about 20 miles south of Sacramento, Whipple and Grossinger are discussing what they found a tattered, yellowing notebook uncovered in a state archive. It contains stories from William Wright, a duck hunter who spent a long, cold night lost in the Delta in 1850.

"On all sides stretched a vast wilderness of tules from ten to fifteen feet in height. The driving storm of sleet was bad, but the pitchy darkness was infinitely worse… Our situation was so miserable that no words can do justice to it."

"The lakes proved to be from one hundred to three hundred yards in width, as near as we could judge. The water was very cold and often waist‐deep."

When Whipple and Grossinger read his account, they knew they’d found a Holy Grail source document. Its detail reveal a landscape that doesn't exist here today and hasn’t existed for some time.

"The Delta is probably one of the most intensively transformed parts of California and it was also changed really early on because of such fertile land," says Grossinger.

As California's Gold Rush boomed, farmers came to the Delta for its rich soil. Land went for a dollar an acre and settlers turned the wetlands into dry, agricultural land. 97% of the historic marshes were lost.

“We have here maybe one of the most important parts of the state's ecosystem and we don’t actually know how it used to work," Says Grossinger.

He and Whipple have layered together thousands of historical sources that reveal an ecosystem of incredible complexity. “We would be in trees right here with a couple winding channels that were dry in the summer but had flowing water in the wintertime," explains Whipple.

Yearly floods from the Sacramento River inundated Delta marshes creating habitat for birds and young salmon. Closer to San Francisco Bay, hundreds of miles of small tidal channels branched out like capillaries in the wetlands. Today, most of those channels have been filled in.

Returning the Delta to this pristine state just isn’t possible, says Whipple, and that’s not the goal of the project. But knowing how the ecosystem once worked could improve the habitat restoration efforts that are happening.

Liberty Island is one place in the Delta that looks as it might have 200 years ago. Not long ago, it was a low-lying expanse of farmland, protected by tall levees.

“The levees broke and it wasn’t financially worth reclaiming,” Says Carl Wilcox of with California’s Department of Fish and Game. The landowners gave up when the island flooded 15 years ago. After that, nature took over. Tules and cattails started sprouting and wildlife followed.

Now, “some of the endangered native fishes, Delta smelt, longfin smelt are using this area,” says Wilcox. They're finding endangered Chinook salmon as well. "These are more productive areas for them, they’re more protected, they’re less prone to predators."

California is using the Liberty Island project as a model for a proposal to restore 65,000 acres of Delta habitat. It's part of the Bay Delta Conservation Plan – a major overhaul of the Delta’s water infrastructure.

Leo Winternitz of the Nature Conservancy says bringing back habitat for declining wildlife could make the state’s water supply more reliable. Restrictions under the Endangered Species Act have limited how much water can be pumped from the Delta in recent years.

There is one big problem with restoration: most of the islands in the Delta are below sea level.

"Just south of here, some of the islands, they're in the 17 to 25 below sea level range. So if their levees broke, what you’d have is a large open body of water. You can’t create tidal marshes in those areas," says Winternitz.

That leaves only a few places where restoration is feasible. Winternitz says in those areas it’s crucial the state look to the past to create the same interconnected habitat that once was.

Governor Jerry Brown's administration is set to unveil the sweeping plan to restore the Delta later this year. 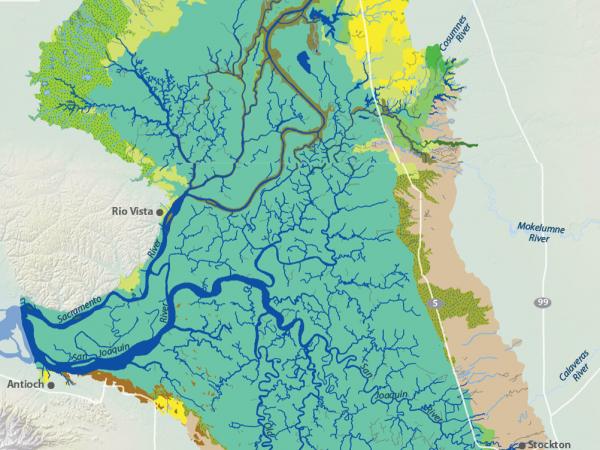 The San Francisco Estuary Institute-Aquatic Science Center, in collaboration with the California Department of Fish and Game, has completed a historical ecology study of the Sacramento-San Joaquin Delta. The project improves understanding of what the Delta looked like and how it functioned prior to the significant modification that has occurred over the last 160 years.https://www.sfei.org/documents/sacramento-san-joaquin-delta-historical-ecology-investigation-exploring-pattern-and-proces